Parks and green spaces are essential to the well-being of any neighborhood. And while the Third Ward has undergone many transformations over the past two centuries, the drive to create places where people can relax and connect continues. Want to rent one of our outdoor spaces for a public or private event? Call the Association office at 414-273-1173. 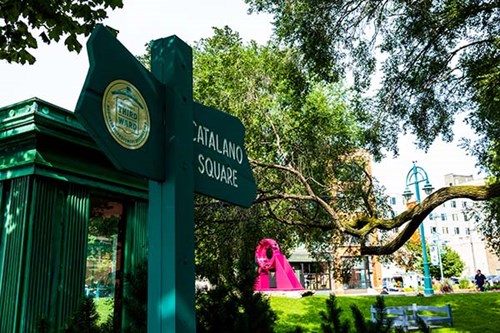 Catalano Square was created as part of the neighborhood streetscape project in 1992. The triangular park is bound by three streets: East Menomonee Street, East Erie Street, and North Young Street.

The name comes from Mariano Catalano, an Italian immigrant who arrived in the city in 1884 and who, together with his brothers, became one of the largest wholesale distributors on Broadway by 1910.

The park boasts many artistic and historic amenities, including a refurbished vintage bus shelter donated by the Friends of Hank Aaron State Trail  and “New Pink Planet” sculpture by artist Richard Edelman.

The park offers an urban amphitheater surrounding the Dragotta Fountain – named after Frank Dragotta, who operated Draggʼs Café on the square from the 1950s to 1994 and “is dedicated to the Italian families who helped develop the neighborhood.” 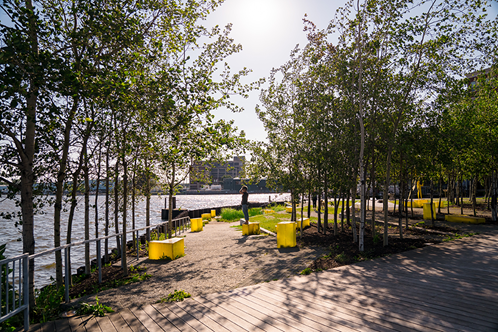 Designed by Boston firm Stoss Landscape Urbanism, Erie Street Plaza earned the Mayor's Design Award when it opened in 2010. The plaza is connected to the Milwaukee Riverwalk at the confluence of the Milwaukee and Kinnickinnic rivers.

The design features native prairie plants, yellow fiberglass benches that are illuminated at night, and several pathways with edges that blend into the vegetation. The plaza uses river water for plant irrigation and offers ADA-compliant fishing access. The sculpture “Sunrise” by Richard Edelman was installed in 2013, and a Little Free Library is located here.

Erie Street Plaza is designed to accommodate a wide array of activities, including festivals, gatherings, concerts, weddings, as well as everyday activities like boat-watching, fishing, and just hanging out. 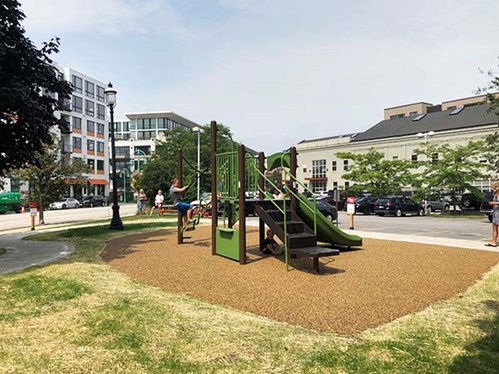 In 2021, Historic Third Ward Association developed Gas Light Park at the corner of Jefferson and Erie streets to provide a space for young children to play. The park includes a United Way Born Learning Trail for fun interactive activities for young children and their caregivers, and a small multi-activity playground. 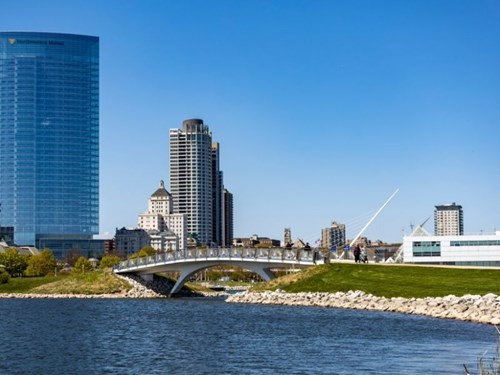 You'll find Lakeshore State Park adjacent to the Henry W. Maier Festival Grounds and Discovery World. The only State Park in Milwaukee, this urban oasis offers a small beach and accessible paved trails which link to Milwaukee's other lakefront parks and the Hank Aaron State Trail. The park offers great views of the city and Lake Michigan and has a reservable, overnight boat slip. 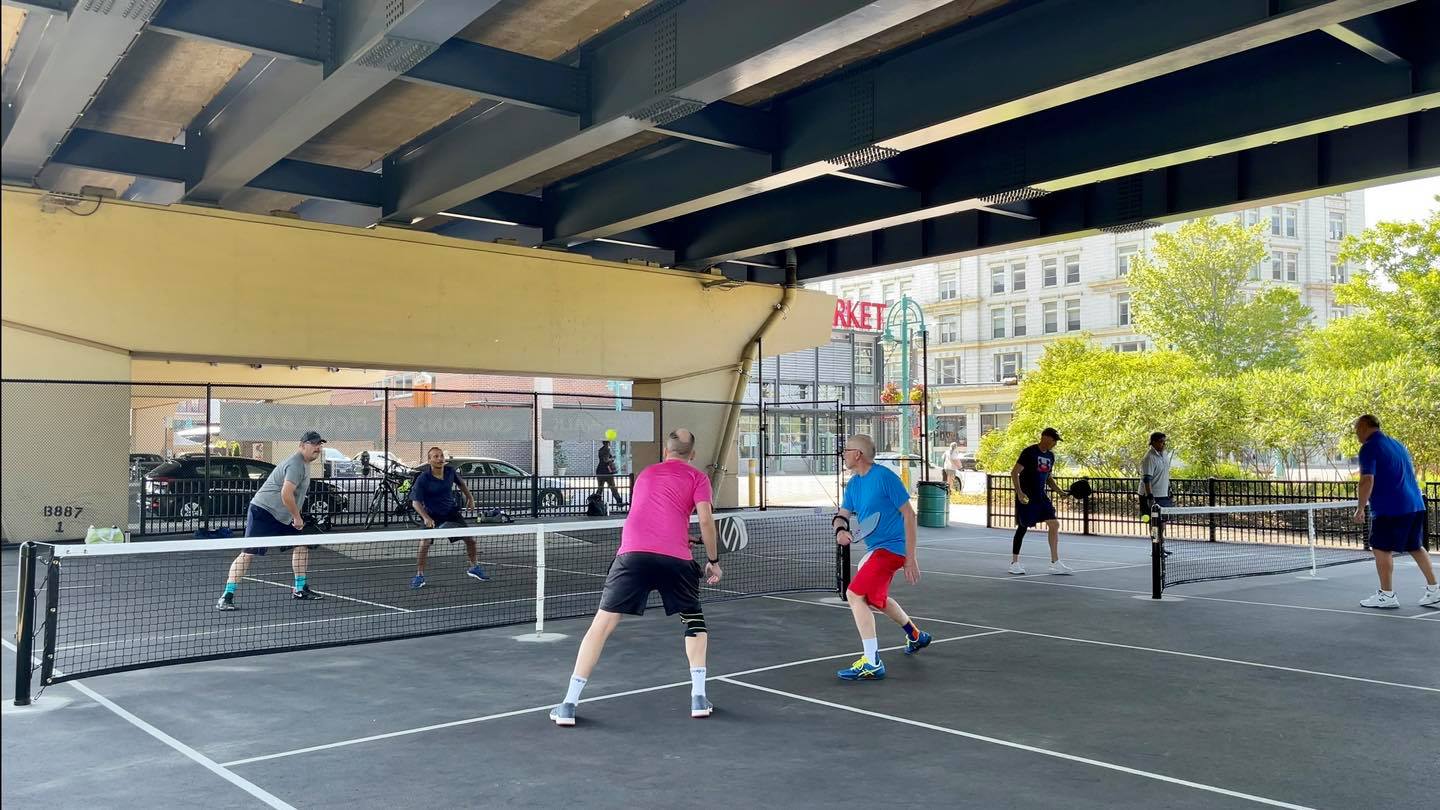 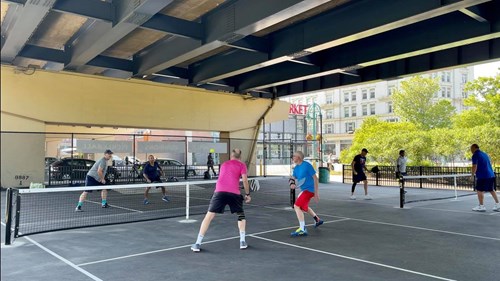 Riverwalk Commons is a wonderful example of reimagining the way public spaces can enhance connectivity between Milwaukee's downtown and Historic Third Ward neighborhoods. 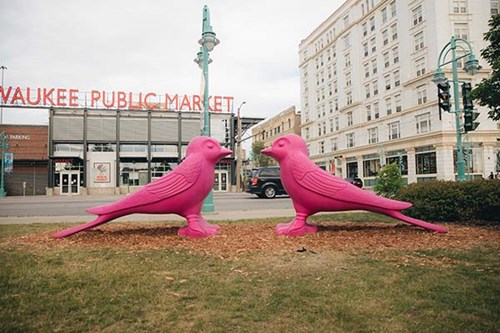 Two giant swallows from Italian art collective Crackin' Art's REbirth collection were donated to the Historic Third Ward Association by Black Box Fund in 2021. The fuchsia birds are a glowing presence in Riverwalk Park - which also contains a kayak storage facility for residents, a small amphitheater, and numerous picnic tables. 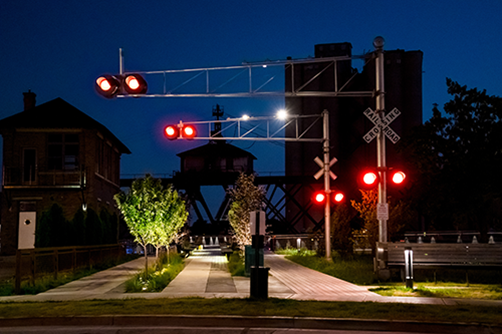 Completed in 2018, Trestle Park occupies the site of a former railway crossing of the Milwaukee River. An inactive railway swing bridge sits in midstream – at one time closing the gap to the trestle pier which juts out 100’ into the river from the east bank.

This pedestrian deck offers seating and incredible views up and down the Milwaukee River. A Bublr Bikes station is located at the park. Vegetation in the park was based on historic details from before the founding of Milwaukee in 1846.

Stop by at night to see the historic railway overhead signal lights which were restored and repurposed.